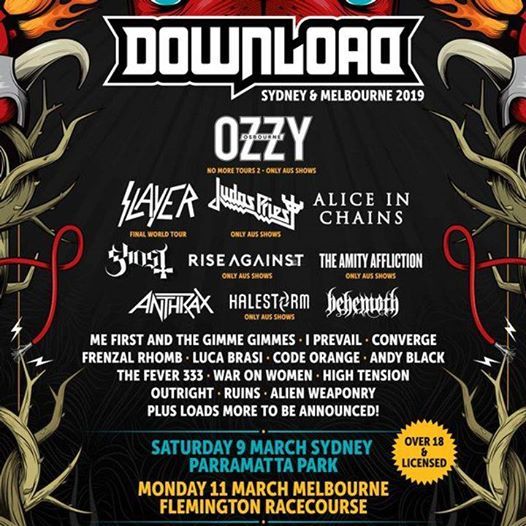 Downloads not like your regular festival, with attendees ranging in age from 18 to 80 the heavy music festival caters for head bangers from all eras. As you walk in a sea of black shirts is basically all you can see, along with more Oakley razors than a pack of wannabe cyclists on a Sunday morning at your local boutique coffee shop. With the demise of Soundwave 4 years ago the heavy music scene in Australia has been thirsty for a festival to wet there whistle. Download has quickly become that tall glass of water. This year spreading north to Sydney as well as Melbourne. Australian domination looks on the cards.
But we’ll focus on Melbourne in this review.

With huge international acts like Slayer and Judas Preist to hometown heroes like Polaris and Justice for the Damned with all the middle ground filled with touring legends like Thy Art is Murder and Luca Brasi, there was something for everyone.
The venue Flemington Racecourse was filled with people from early Monday morning and punters could browse any of the 4 stages with acts playing all day and into the night.

Early in the day I Prevail entertained a massive crowd on the red stage even taking in an Australian delicacy mid-set, the shoey. The excitement didn’t end there withJason Aalon Butler from Fever333 climbing all over the soundboard scaffolding to the delight of the crowd. As the day wore on, Behemoth drew a huge crowd with there hypnotic, dark riffs and had heads revolving in unison. Fists held strongly in the air as Rise Against took fans into the night. Where Thy Art is Murder incited a 300+ strong circle pit that engulfed the sound desk and anyone around, genuinely a sight to see. Special mention to Justice for the Damned for playing a tight intricate set even while having technical difficulties, and aligned as the same time as some of the biggest international artists on the bill, there loyal fans stomped holes in the ground. As Slayer took the final performance on the red stage with their fast, sliding riffs echoing around the racecourse we thought to ourselves, today was a good day.