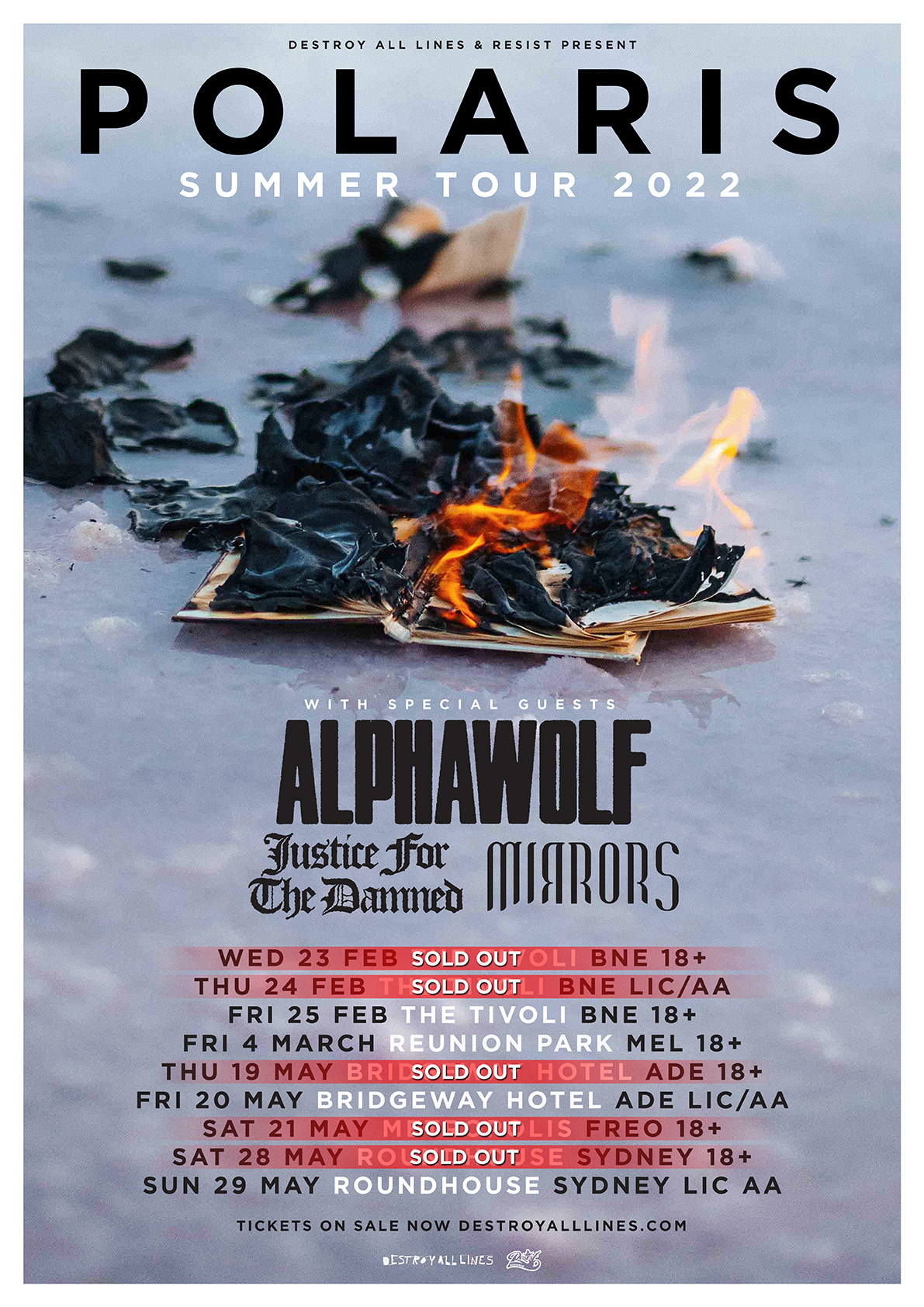 TOUR DATES HAVE BEEN POSTPONED TO MAY IN WA, SA & NSW DUE TO ON-GOING COVID RESTRICTIONS

Sydney metalcore titans Polaris are packing their bags and heading back on the road in February, March & May with some great friends in tow. The Summer Tour will see them hitting all national cities with very special guests Alpha Wolf, Justice For The Damned and Mirrors.

Make Them Suffer sadly have to withdraw from the Summer Tour due to WA borders still remaining closed. They have been replaced by Alpha Wolf. The Summer Tour dates have been postponed to May in WA, SA and NSW due to the on-going COVID restrictions in those states. All updated tour dates are below.

In 2021, The Death Of Me was an ARIA-nominated, #3 ARIA Album chart debut record which had glowing reviews from critics and fans and saw Polaris sell-out the biggest national headline tour of their career.

It’s been an incredible ride for Polaris with countless sold-out headline tours of Australia, as well as supporting Architects and Parkway Drive around the country; five runs throughout Europe (including a series of arena shows supporting Architects and a slew of high-profile summer festival spots); three separate US tours; not to mention performing at the Download Festival plus Unify Gathering in Australia and most recently headlining Knight & Day Festival.

To become the head of the pack, it takes heart and determination. Over the last 24 months, Melbourne metalcore juggernauts Alpha Wolf have proven they have all in abundance. 2020 saw the release of their sophomore album ‘a quiet place to die’, that landed #6 on the ARIA charts and a nomination for Best Heavy Album at the ARIA awards. Through all the chaos these last few years have been able to throw at the band, they’ve still managed to play multiple headline runs of sold out shows, secured places on some of the biggest festivals in Australia, and set to embrak on their takeover of America in March.

Justice For The Damned have come a long way since their early days at Blacktown Masonic in Western Sydney, methodically planning their path, honing their craft with two ground breaking albums, touring relentlessly across the globe and supporting some of leading artists in the game such as Parkway Drive, Killswitch Engage, Thy Art Is Murder and Knocked Loose. Remember these words, Justice is forever!

Opening the bill, will be Gippsland’s finest in Mirrors, who have gone from strength to strength since the release of their 2019 EP, Cold Sanctuary. Landing festival slots such as Knight and Day Festival, Unify Gathering to supporting international household names such as Wage War, Crystal Lake, The Devil Wears Prada and most recently inking a massive deal with Australia’s leading heavy label Resist Records.

Polaris always delivers and the Summer tour will be no different, so don’t miss out on what promises to be the metalcore tour of the year!

Tickets on sale now at
www.destroyalllines.com