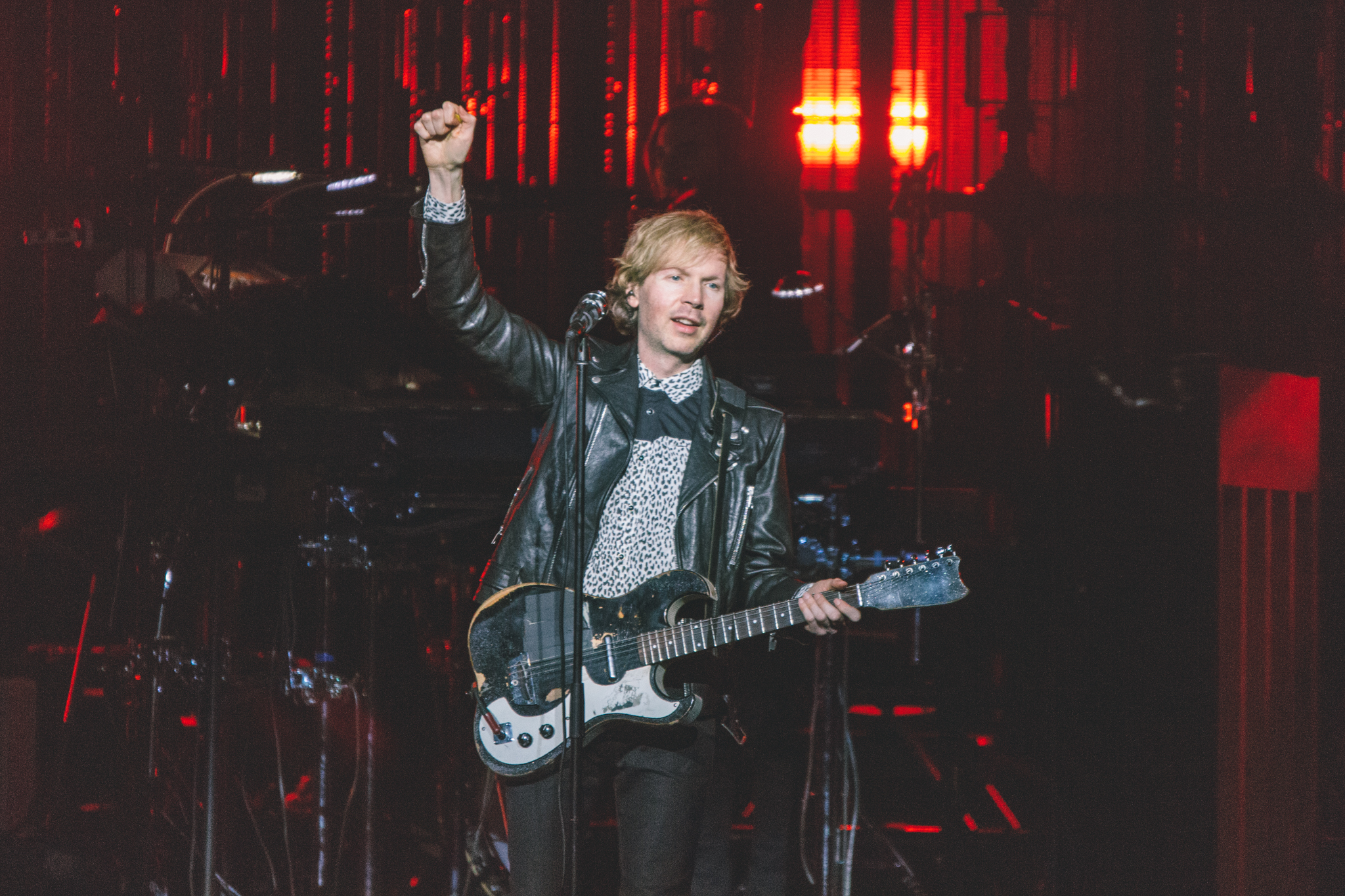 You’d be forgiven for thinking a Beck show would be a muted affair. The American musician has always seemed intelligent to a fault – introspective and brilliant, but also reflective and serious about his craft. Then, you see him in concert and realize how much of a performer the five-time Grammy winner actually is. He’s engaging, energetic, and there to entertain. Heck, he even dances.

Before he took to the stage, though, Sydney’s Meg Mac was on duty to open the show. While she possess a strong, capable voice, the pop singer seemed an odd pairing to Beck – her musical stylings more to-the-point. It’s much easier, in fact, to imagine her on tour with someone like Selena Gomez. To Mac’s credit, however, both she and her five-piece backing band took the challenge in stride and even pandered to the more indie leanings of the audience with her triple j Like A Version cover of Tame Impala’s “Let It Happen”.

For Beck, it was a bit of a rocky start both metaphorically and literally – the 47-year-old and his seven-piece backing group opening the night with the heavy guitars of “Devils Haircut”. Playing at Melbourne’s Margaret Court Arena on Wednesday night to about 3,000 people (running the demographic gamut between fans of 90’s era alt-rock Beck; acoustic guitar troubadour Beck; and, more recently, sunny California Beck,) he admittedly took some time to find his footing.

The bad: a sound problem with the stage right speakers took about four songs to correct, the mix was slightly muddled from the outset, and he seemed a bit nervous. He also had to fight hard to win over the crowd – a practicality for any musician playing mid-week to an arena halfway across the world. Thankfully, though, Beck persevered and, once he settled down on stage, it was easy for the audience to embrace his personal eccentricities and musical offerings. 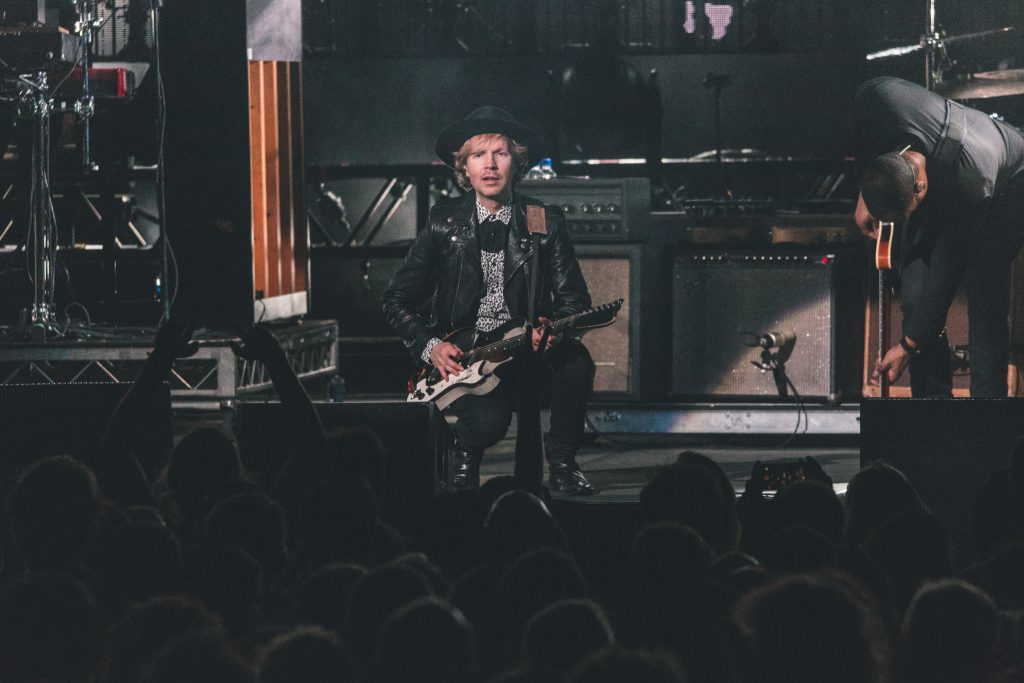 Whether it helped make him more comfortable or perhaps made him more self-aware, at one point Beck told the crowd: “I can see every single one of your faces,” gazing around the venue’s half-arena setup. He then proceeded to say hello to both Rick and Sarah (“I feel like there are a lot of Sarah’s in Australia,” he mused) … leading me to believe we’re all best friends and that he’ll definitely read this review and look at Rick’s photos. So: Hi Beck!

“We’ve got a lot of ground to cover. Should we play a long show? Is there a curfew? Who cares?” Indeed, the last time he played Australia was in 2012 – skipping the country altogether on his Morning Phase tour. He made up for it by grabbing an acoustic guitar and, after throwing in a cover of Prince’s “Raspberry Beret” and taking us through “Debra” (for which he changed the lyrics to “Sheila”, in honour of Australia,) he played the lone Sea Change offering of “Lost Cause”, plus a pair from 2014’s Morning Phase – the beautiful “Heart Is a Drum” and “Blue Moon”.

Beck, though, is also one of the few artists whom I can genuinely say: I wish he had played more new material. Though he treated the Melbourne crowd to one of the first live performances of “Seventh Heaven”, he also only played five songs from Colors (one of the best albums of 2017, in my opinion) and much of those offerings were kept until fairly late. The punchy, California pop coolness could really have helped get things going had the set been structured differently. The classics are great and all, but if Beck had thrown “Wow” or “Up All Night” earlier into the show, the audience likely would have gotten into the whole thing much more readily. 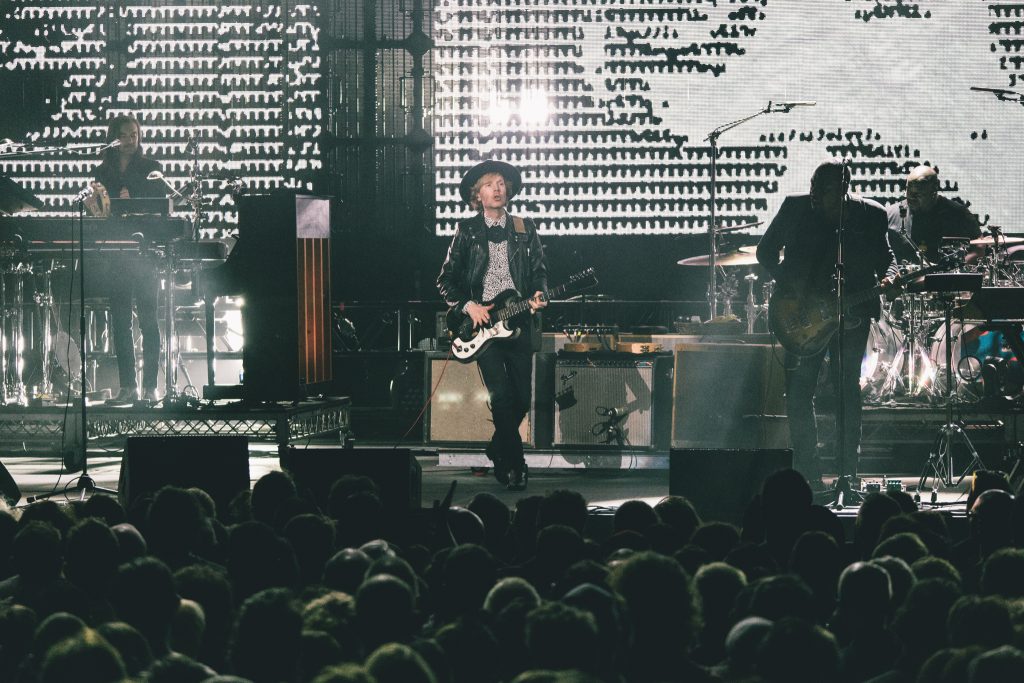 I’m nit-picking, though, because he really couldn’t leave us wanting for more and he’s obviously got a prolific back catalogue to get through. Other highlights of the night included “Qué Onda Guero”, from 2005’s Guero. The song was a shout out to Los Angeles and played out like a Gorillaz number thanks to the vocal delivery. The scrappy “E-Pro” did well to close out the evening, too, and put guitarist Jason Falkner’s talents on display – a tempo-shifting number that provided a final pre-encore singalong.

Beck’s banter was also amusing – “I’m really appreciating the one man lighter over there,” he said during “Debra”. “It pretty much sums up my entire career.” Equally topical was when he asked for everyone to give an Owen Wilson “wow”, during his single of the same title, no doubt referencing Melbourne’s Tuesday night “Owen Wilson Saying Wow” gathering. He also joked about the stage setup, telling the audience: “I paid for this smoke machine by the way. That’s where your ticket dollars went.”

Returning for an encore of “Loser” and “Where It’s At”, he told the audience: “Now all I’m thinking is… Why haven’t I been here in the last six years?” going on to add, “Let’s just reflect on this evening. Let’s just take a moment to savour it. It’s the flashback scene of all the best parts of the movie. This is the part where the dog jumps up and catches the Frisbee.”

Ironically, the thing about seeing Beck in concert is that there’s not much room for introspection – there’s just so much happening on stage and it’s best experienced there and then. For a man who’s so technically brilliant and profound in his output, the sense of off-kilterness makes for a riveting live experience. There’s a distinct humanizing element to it all, which is where so much of his appeal lies. 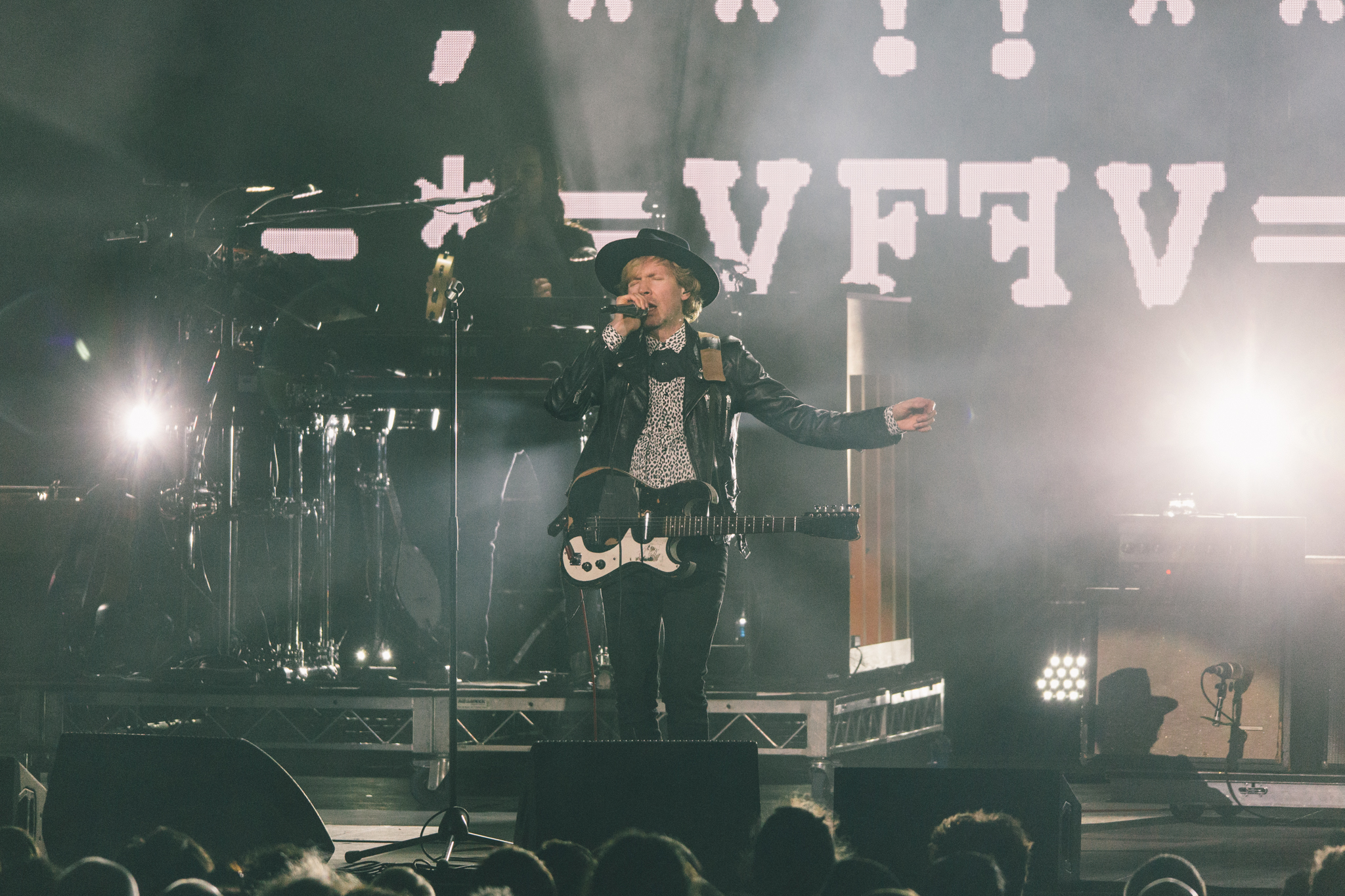 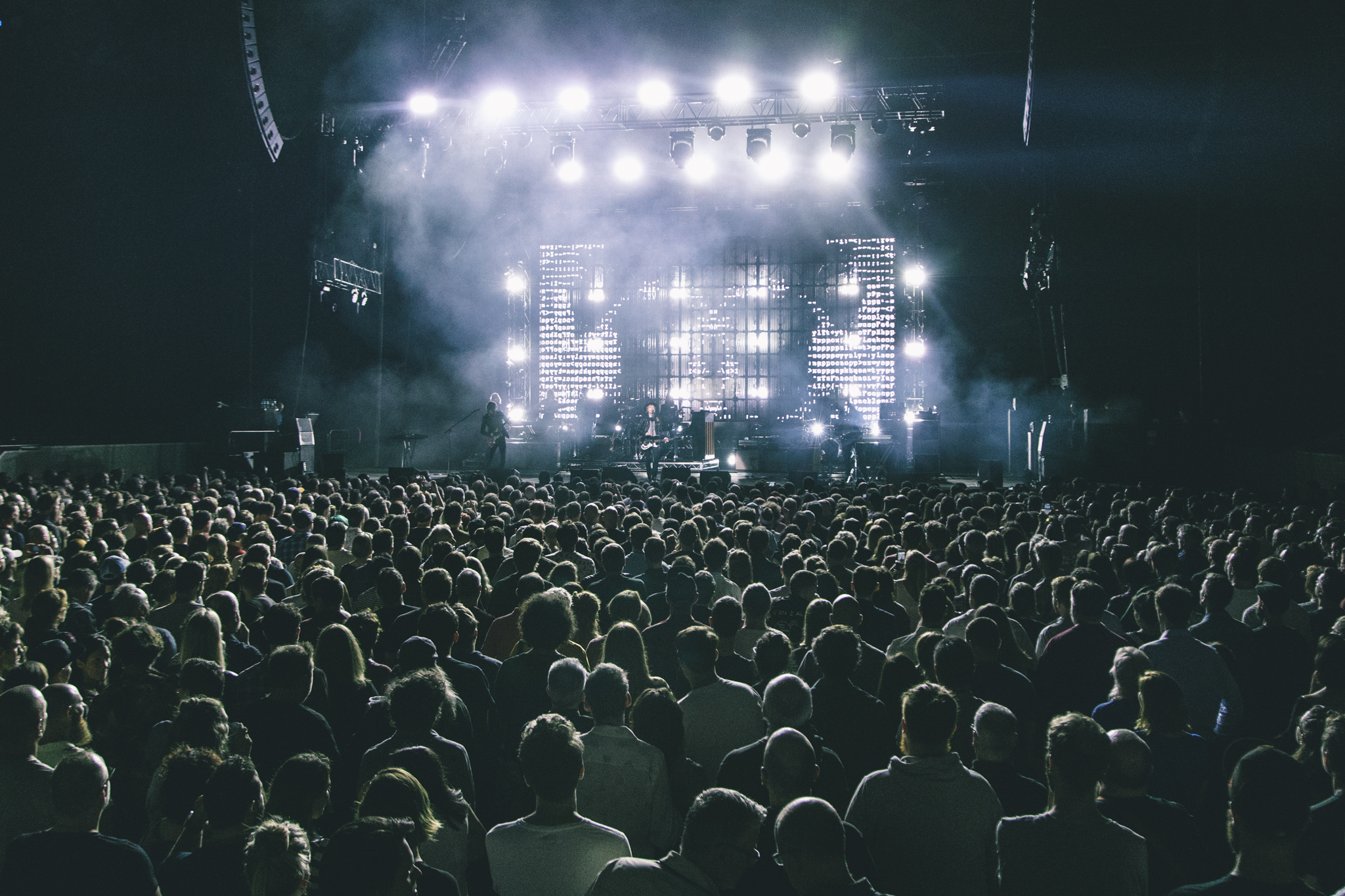 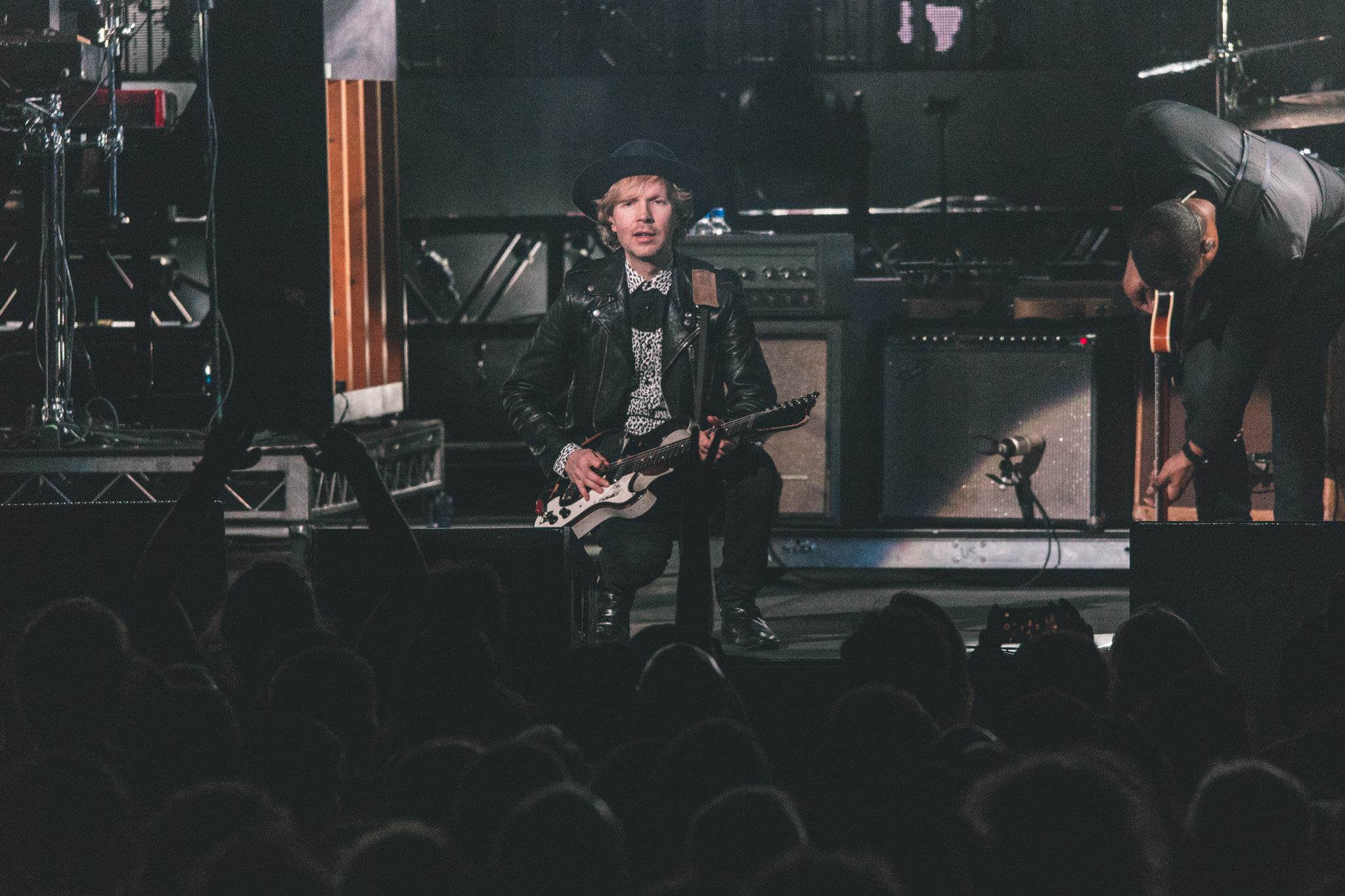 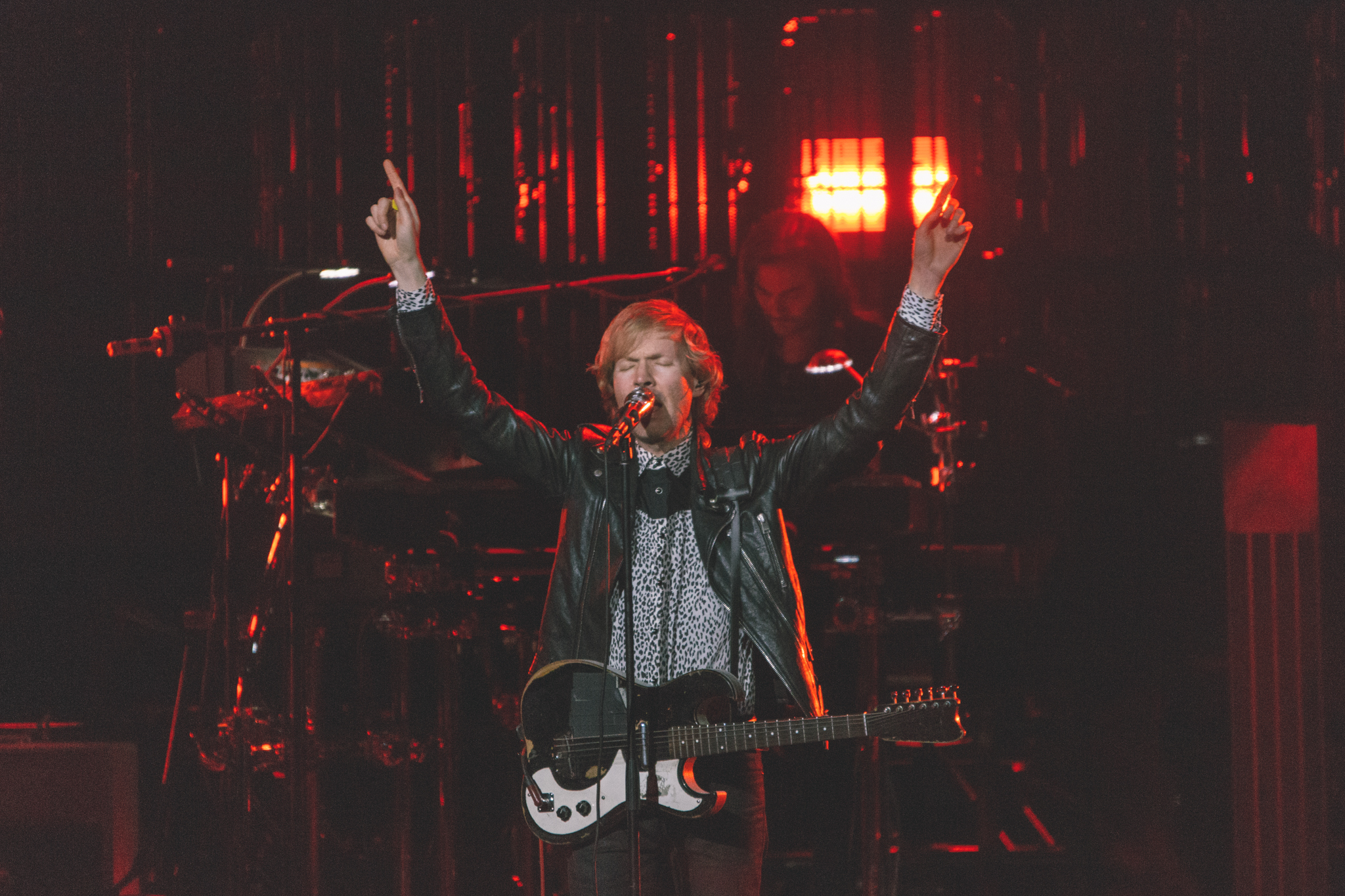 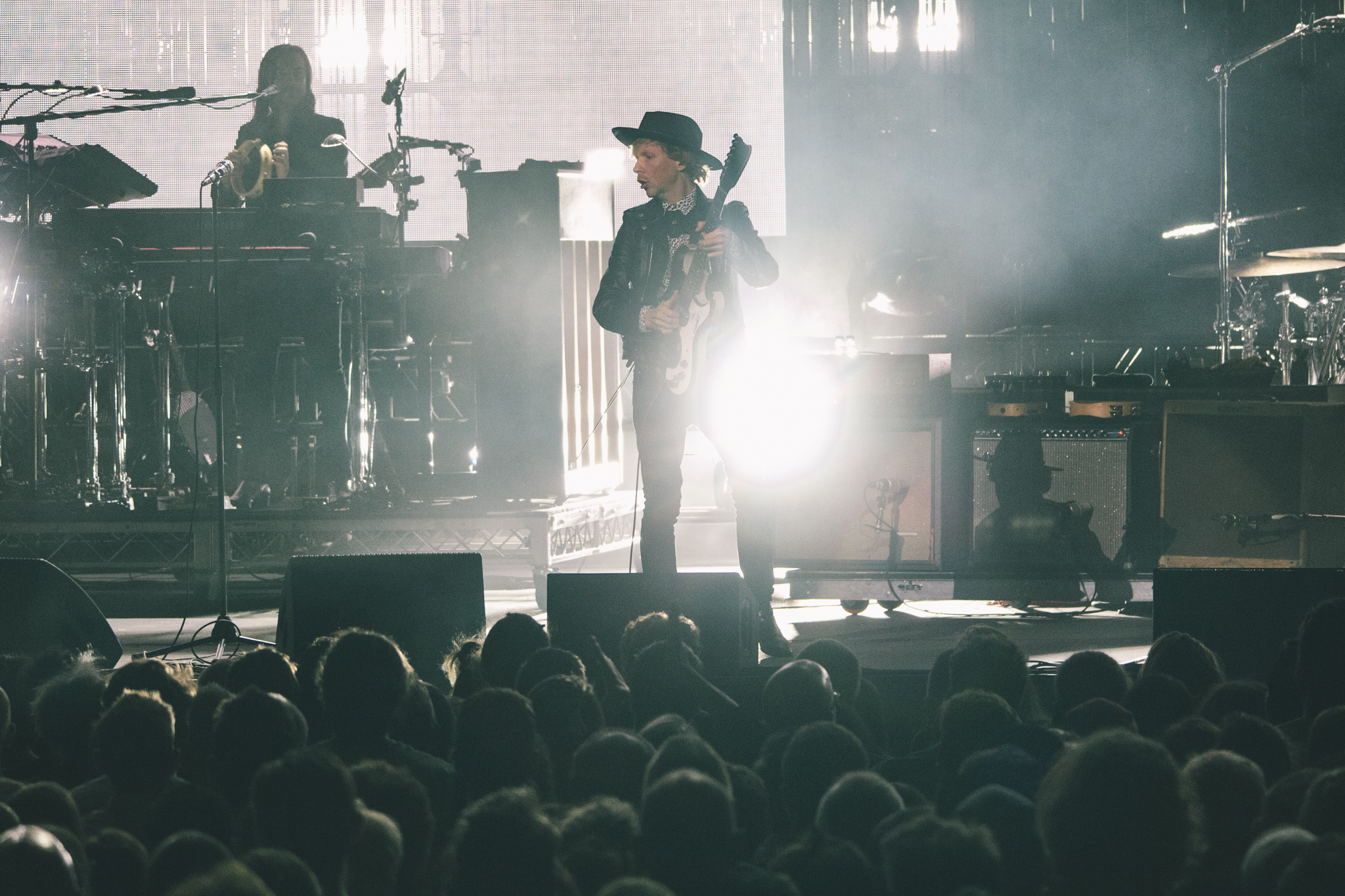 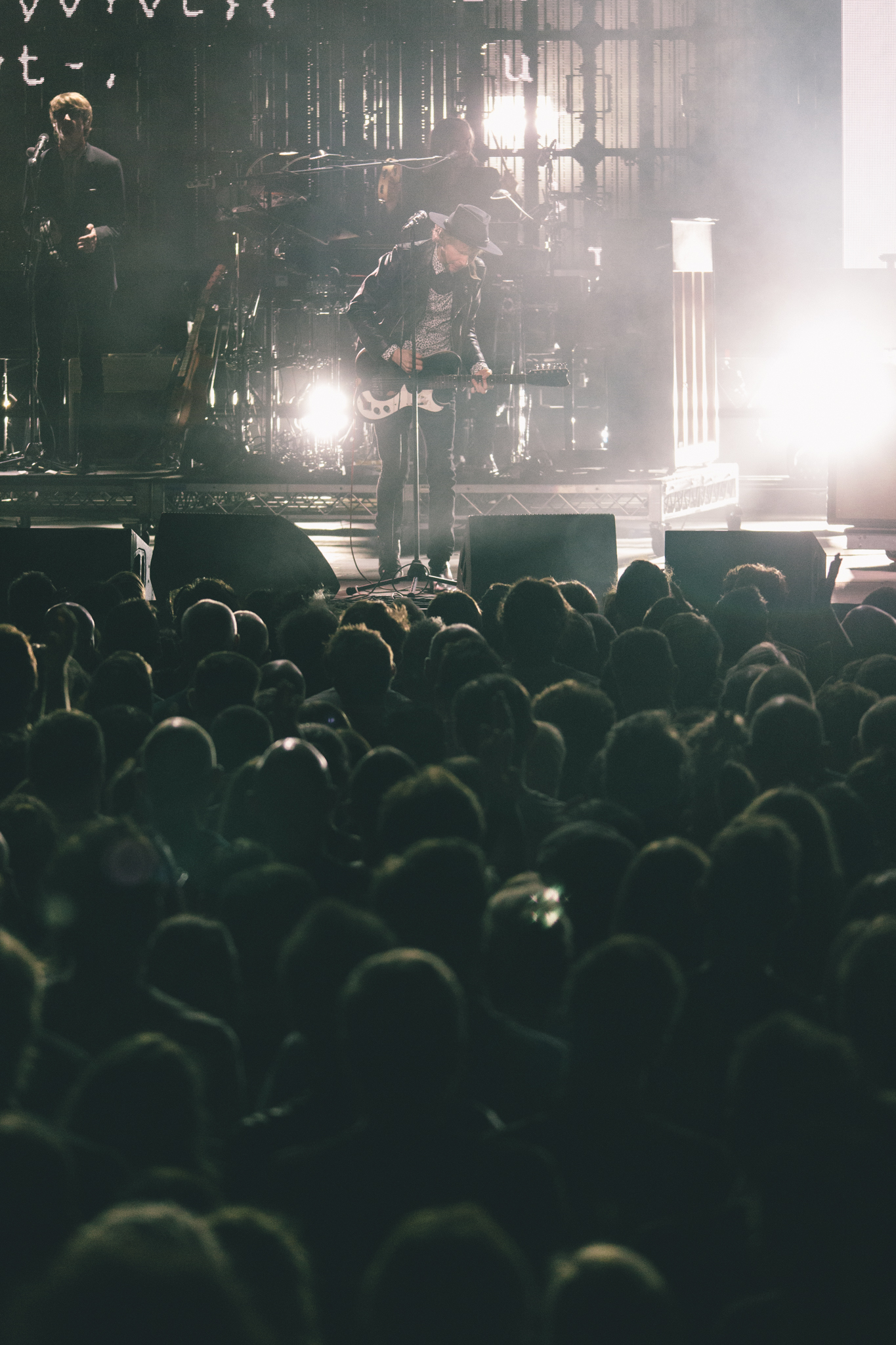 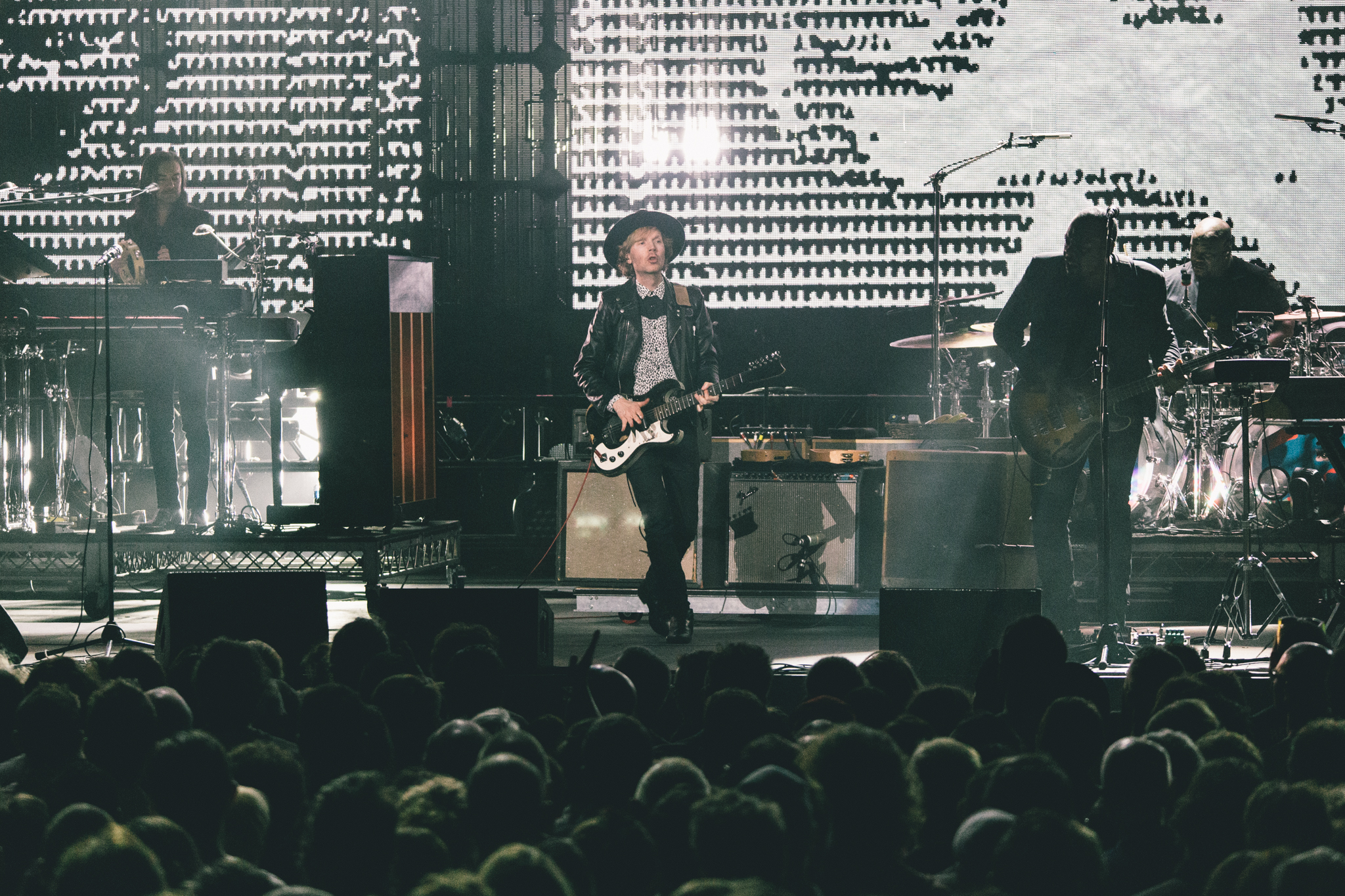 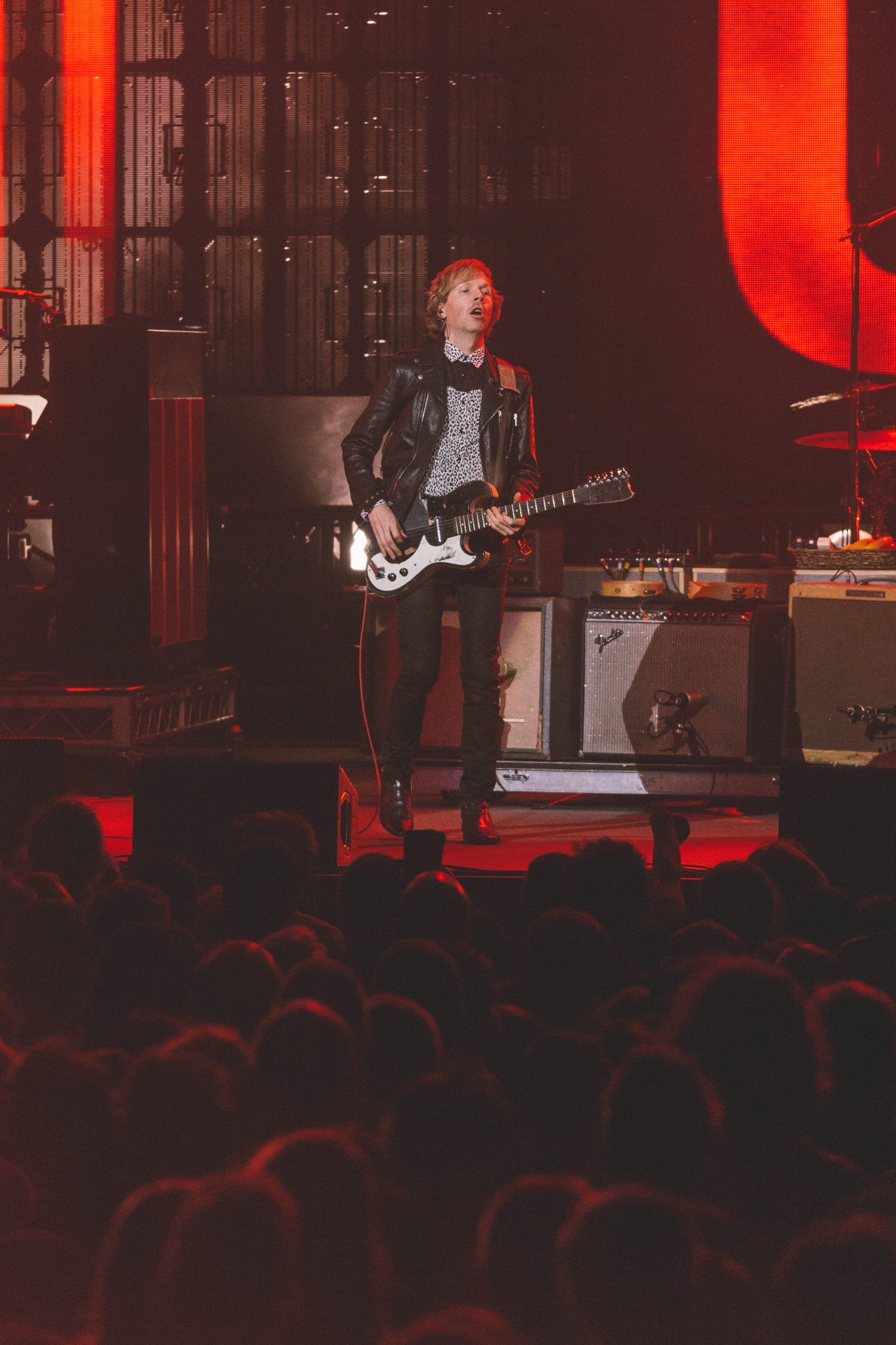